Food that is worth learning to make because it is easy, beautiful, elegant or fun, but preferably all of the above!

I have to admit, they are a little weird if you are not familiar with meringues.  They are made only with egg.  Not even the yolk, just the whites.  How good could it be right?  We were looking for some gluten free cookie options (not for me – I have no problem with gluten.  You can give all your extra gluten to me!  This was for the gluten haters.)  We saw quite a few recommendations for these meringues.

They are kindof like cotton candy.  They literally melt in your mouth when you bite into them, and they are very sweet.  I had a very low heat long cook time recipe which called for 2 hours cooking time at 200 degrees.  The results were “commercial style” meringues that were crisp all the way through.  I did however try some throughout the cooking time out of sheer impatience.  Lesser cooked meringues are somewhat chewy, but either way, they quickly dissolve like cotton candy once they are in your mouth.

They were a huge hit with the kids (keep in mind they are much more like candy than cookies).  I did discover getting the meringue to peak is a gamble.  There are unlimited reasons why people think egg whites will fail to “peak”.    Old eggs vs. fresh eggs, warm mixing bowl vs. cool mixing bowl, humidity, accidentally contaminating with egg yolk or some other oily substance.  Too many variables for an impatient have-to-have-it-now person like me.  I can’t wait the two hours to taste them!  The first time I tried, I knew none of these “rules”.  I was on the phone and not even paying attention.  I piped them out and they were perfect.  The second time was a flop.  That’s when I turned to the internet to try to save them.  I ended up throwing them out and starting over.  3rd batch were not as fluffy, so I just piped them out anyways.  They tasted fine, but weren’t as perfect looking.

The next  day, I got good peaks, but I wanted to try coffee flavored (YUM) and the coffee killed some of the fluff.  Who cares!  Did I say YUM?  So if you are going to try to make meringues and can’t decide what flavor to go with, try coffee instead of the flavor listed and add a little vanilla.  Also, they are best fresh, as in still warm in the oven when you are supposed to be leaving them alone to cook! 😉

I didn’t get pictures of the coffee ones – not because they were ugly- they actually looked ok, but because we were in a big hurry for our party.  I decided to write off non-peaking egg whites to “cranky chickens”.  So watch out! 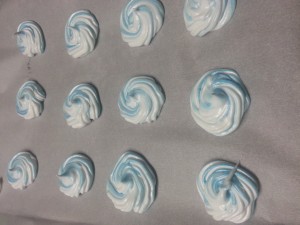 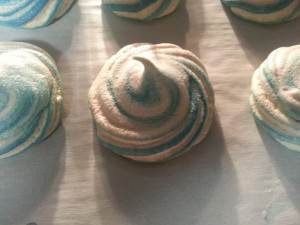 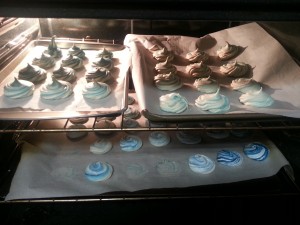 One more cool thing, I didn’t know that you can pipe out meringue into shapes and use it for cake decorating.  You can pipe out letters and flowers and anything you can do with cake frosting and get crunchy little sugary cake decorations.   AAAAAhh some!

1/4 tsp flavoring (orange, coconut, almond, cherry, vanilla, whatever floats your boat extract)  for coffee you need about a Tbl strong coffee and 1/4 tsp vanilla and fold the coffee in right before piping

1/4 tsp. cream of tartar (this helps the eggs peak – unless the chickens who laid them were cranky, in which case it gives you a good excuse buy cream of tartar and look like you are a smart chef)

3/4 c. granulated sugar (supposedly the sugar is an aid in getting the eggs to peak, although I find I can get eggs to peak just fine until I add sugar so I am sticking with the cranky chicken theory)

Add egg whites, flavoring and cream of tartar in a mixing bowl and whip egg whites to soft peaks.  Slowly add sugar and whip to stiff peaks.  If you over whip they fall back down so watch out.

To get that little two tone pinwheel, drop food coloring down the sides of your piping bag.  Pretty heavy if you want vibrant stripes.  Spoon meringue into piping bag.  Pipe meringue onto parchment lined baking sheets.  Bake at 200 degrees F for 2 hours.  Let the meringues cool in the oven to avoid cracking.  I skipped this step 3 times and  never got a crack so follow at your own peril.  Store in an air tight container.

For all those “don’t eat that it has raw egg in it” people, remember, meringue pies are put right onto the pie and only browned before serving.  These are edible at any time from the mixing bowl to the 3 hour cure time and basically taste the same other than texture changes.

Almond bark and sprinkles!  This is a favorite at our house.  I am wondering why we would ever bake anything without stopping to immortalize it in pictures.  All that hard work down the gullet and no one ever knows how pretty it was.  I am taking pictures of all my baking (that looks good ha ha) this year!  Maybe that would make awesome Christmas cards.  What a concept.  Art from your own kitchen!  Plus I can put it in my recipe book! 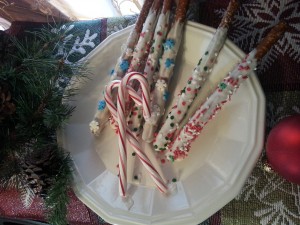